The History of IATSE Local 748

At one time, there was only the Phoenix Suns and minor league baseball in the Valley. Broadcasting was defined by two production operations: Cox Cable and Southwest TV. Cox Cable had deep corporate pockets, the ability to bid for rights, and the ability to supply production truck resources without breaking a sweat. Southwest TV, after a hostile business take over tactic by Larry Meyers that put the company under his control, was a single truck production company for hire. Initially Southwest Television supported visiting team coverage for Suns and spring training work in the valley.

Southwest TV (SWTV) had a crewing department in house, and would secure crew on a as needed basis for their clients visiting the valley. Over the years the amount of sports work grew in the Valley of the Sun, and SWTV became a important player in the region.

The relationship between freelancers and SWTV was anything but productive. The situation left each individual freelancer to make their own deal contract which defined the terms of employment for each daily hire. This meant each show would have numerous deal memos, and conditions, expanding the time and effort SWTV had to invest to staff a full crew. SWTV was more than willing to do this as it gave them ultimate control over the cost of employment and ultimately control over each freelancer.

It was easy for SWTV to simply stop hiring any freelancer, for any reason, and force that freelancer into financial hardship. Simply put, more cash flowed through the company for freelance payroll than money from equipment operations. Crewing was extremely time consuming, a potential profit center or at least a short term loan. Many small battles were fought between various freelancers and SWTV about timely pay and terms. Nothing ever happened to bring all the freelancers together as a group, until a tipping point was reached that caused a walk out of the freelance crew during a local Phoenix Coyotes triple broadcast that included Home, Visiting and ESPN crews.

SWTV's Legal Council and one of their crewing personnel had decided to make an announcement just before lunch at the Arena. Payroll was becoming a financial problem for SWTV as crewing had grown too large for the cash resources they had on hand. SWTV announce it would pay freelancers when they received payment from the client. For freelancers this could mean a job would be paid anywhere from 30 to 70 days out.

Ninety percent of the freelance crew walked out and congregated at Coopers’town across the street from the Arena. For the first time freelancers--as a group--took action. In a panic, SWTV asked what it would take for freelancers to go back to work. Terms were conveyed and SWTV agreed to a meeting where they would sign an agreement of the terms the very next day. Representing freelancers at the meeting with SWTV were Bob Joyner, Mike Zissis and John James. SWTV was under a lot of pressure and tensions were high, but at the end of the meeting the freelancers had a signed agreement stipulating how long before payroll would be met and other small concessions.

A meeting of freelancers was called and held in the backyard of John James’ home, Ivy Ranch, a few weeks later. It was determined that conditions in the freelance market were deteriorating and action had to be taken to protect the freelance market for live television production. The discussion that evening was free and vigorous, and after much consideration of the three broadcast oriented unions - NABET, IBEW and IATSE - it was Chuck Burke's recommendation of IATSE that won the day.

Thus started a two year process of establishing a local union under IATSE. Those two years were a learning experience for labor and management. Management learned the union process and its founders were protected by Federal Law, and freelancers learned exactly what a deal Labor was giving to Management before the union. SWTV tried its old methods of inflicting pain on freelancers, and then found out they were breaking Federal Law. Civility, balance, fainess and benefits had come to the fastest growing television market in the country. IATSE 748 was chartered April 1, 2003.

Contracts with the union were signed by the individual crewing companies (two owned by paying members of the union) and by one network. The timing was perfect. A transition was occurring in the Arizona Broadcast market. Baseball had come to town along with an NHL franchise. It was now possible to make a living in sports broadcasting year around. The union made a safe and dignified work place, provided employer subsidized healthcare, retirement and pension. And it provided respect, for both management and labor.

Below is a listing of the past and current Elected Board for IATSE 748: 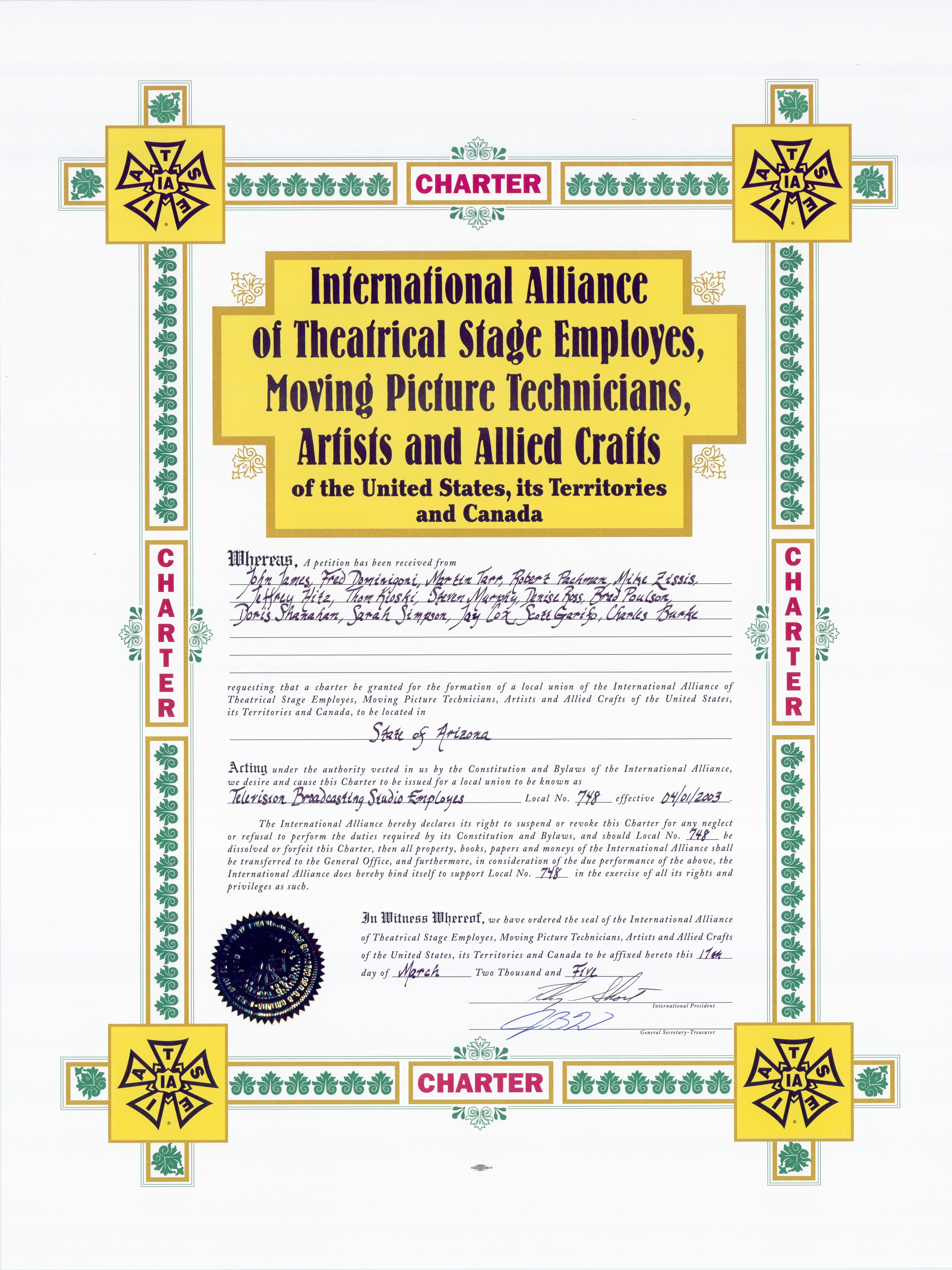